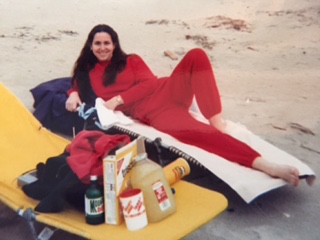 The Good Old Days of Tanning

Dang, it used to be fun in the sun. Life was simpler when we could tan all day and our only worry was getting a sun burn. Yes, sunburn hurt, but it was usually worth it. There was no mention of skin cancer back then so ignorance was bliss. Our skin got red as ketchup before we knew it. I have to admit, my mother knew best, warning me of sun damage before the world warned us about it. But did I listen?

Growing up near the beach, my buds and I spread our towels between the sand dunes. This was way back in the old days when it was still legal to walk on sand dunes. Nobody knew about turtles nesting in the soft sand or worried about erosion of our wide beaches. I never saw a turtle. Only an abundance of annoying little crabs we called sand-fiddlers. The dunes served as wind blocks when it was too cold to “lay out” on the beach, which was normal for early spring in North Carolina.

With no wind to bother us, and the sun bearing down, we were bathing beauties or at least tanning teens and tweens soaking up the rays. We had a transistor radio. It stayed tuned to the beach station that tended to our skin safety with a DJ telling us every twenty minutes, “Time to turn before you burn.” It didn’t matter if the station played seventies rock or beach music, the DJs were the resident skin care specialists.

In spring, getting sunburned was our goal for going back to school the next Monday. Here’s a disclaimer. “Kids of today, please do as we say, not as we did.” Even if our skin peeled like an onion a few days later, it was worth the, “Ouch, I’m sunburned,” laments when someone touched our shoulder. Worth all the pain when the sheets touched our fiery red skin that first night. Worth dodging the teasing touch of friends poking each others’ skin to watch the poked spot go from white back to red. Sometimes we’d try to ease the burn by putting concoctions on our skin like milk, vinegar, or aloe plant slime. The best was Solarcaine to deaden the pain for a little while.

Why didn’t we just use sunscreen? The answer is, there wasn’t such a thing. We had Coppertone and Sea and Ski suntan lotions and other such brands that might moisturize the skin, but did nothing to protect from a burn. Hawaiian Tropic Dark Tanning Oil was life changing. We all smelled like coconut oil and the sand stuck to us like flour to chicken ready for the fryer. There were some die hard tanners who mixed baby oil and iodine together to enhance their tan, but I think the iodine just dyed the skin a nice reddish-brown. I knew a few people who used actual motor oil for tanning lotion and they were as dark as a white person can get. Perhaps I shouldn’t share that and give any young people ideas they don’t already have. Like that could happen.

My proudest attempt at tanning was with one of my best friends, whom I’ll name so she can share credit for our ingenious idea. Mimi and I decided since cocoa butter was a new thing for tanning, and butter browned toast, butter should brown us. Yep. We got out the Mazola and slathered ourselves in buttery spread. Laying on our beach towels atop our ski boat sitting on a trailer on dry land in my back yard, we proceeded to roast ourselves. I can still smell the buttery aroma rising off our long white legs cooking in the sun. Let’s just say coconut oil smells lots better.

Thanks to sun damage days, age spots and skin cancer, carefree days of “laying out” are gone for most of us. Sunscreen is a must pretty much from birth, yet we need Vitamin D to combat all the deficiencies many of us face. It’s a dilemma. Dune tanning is illegal these days. Now I can only dream of a stroll through a sand dune without damaging the earth or a turtle nest and lying there to feel that warm sun on a cool spring day. Working on my spring burn. Watching out for those dang sand-fiddler crabs.

16 thoughts on “The Good Old Days of Tanning”