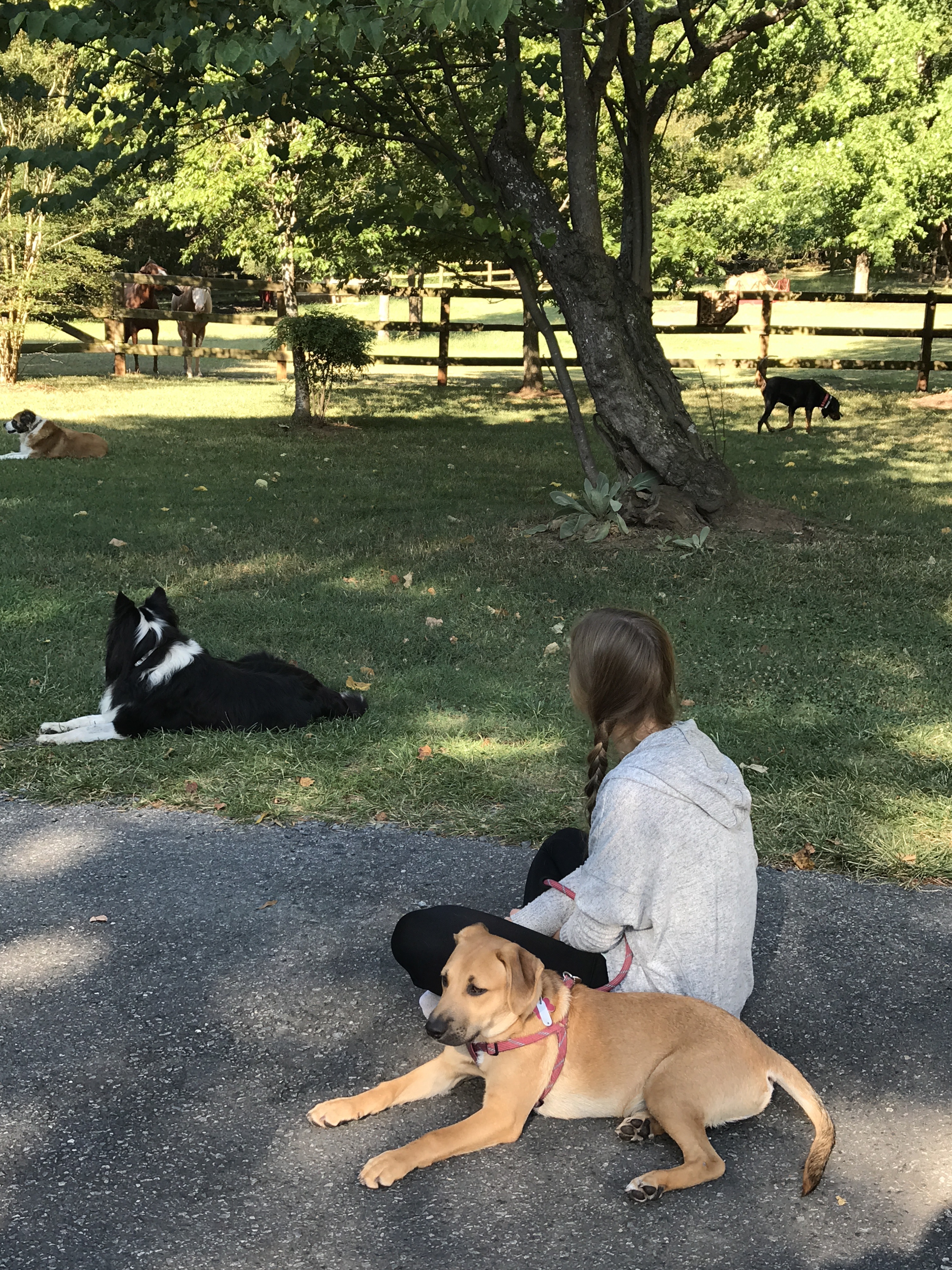 Fluttering In and Out of the Empty Nest: This Time With Grand Pets

It’s Empty Nest time again. Time to either cry or celebrate, depending upon your point of view. It’s a little different for us this year because we’re sending five family members back to college instead of the usual three. Each of our twenty-year-old triplets came home for the summer, two of them with baby animals. Yep, we needed a kitten and a puppy to add to our six-animal menagerie of cats, dogs, and horses.

It would be so easy to scare those two. Which one should I jump on?

I must admit, I was less than thrilled about the new puppy knowing all the time required for housebreaking and training. Kitties, I think, are a little easier. Anyone who’s ever raised a puppy understands that it’s a full time job. Even with extreme vigilance and hourly trips outside to potty, messes happen. Our hardwood floors have never been spot cleaned as much as they have this summer and we should invest money in pet stain and odor spray products.

What do you mean I’m all fixed?

Our daughter Sarah’s puppy, Tucker, is a “mess.” That’s sometimes southern for a “bunch of vegetables or fish” but in this case it means “a real handful.” He’s a typical teething puppy that chews almost anything including the other dogs’ ears and feet causing squeals and growls. Chair legs, rug corners, wicker baskets or whatever is nearby will do. He’s a master at chewing up dog leashes, remote controls, and mail tossed where he can stand on hind feet and snatch it. Unfortunately he can’t tell the difference between real mail and junk mail.

I needed the tape to wrap a present for you.

He removed the handles off my five-pound weights, chewed up my laptop charger, and destroyed a new roll of Scotch tape. I heard him munching the plastic tape dispenser from the far end of the house. On a shag rug, that broken plastic is sharp. Only the bathroom scale survived his teeth. I found the metal scale flipped upside down on my bathroom floor looking like it had begged for mercy.

I thought it was a giant marshmallow.

Having four children, I know that much too often silence means someone is up to no good. I’ve usually anticipated the need to take a picture or video as proof of all the children’s mischief. The same goes for our animals. For example, as soon as I pried a new roll of toilet paper from Tucker’s mouth and headed toward the bathroom to put it away, he rushed back in ahead of me, then pranced like a show dog into my bedroom holding the toilet bowl brush in his mouth like a prized extra long bone. He was so darn cute, I had to laugh and take a picture before telling him, “No” and “Drop.” We played keep-away around the bed until I retrieved the toilet brush and closed off the bathroom.

Now young’un, you need to stop attacking Miss Daisy, now, ya hear? The wisdom of Mandy.

We’ve closed quite a few doors this summer; the trio’s bedroom doors are closed due to our son, Joe’s new kitten, Zhor, named for his moustache and goateed look-alike, Zoro. Zhor bullied our big old black cat, Daisy Mae. That tiny critter thought he was a huge beast and made endless sneak attacks on Daisy Mae, who had zero interest in playing “Wide World Wrestling.” Daisy went along with some playful boxing but the full-on vampire-neck biting, growling, and fur pulling was not her “thing.”

Looks can be deceiving. Daisy isn’t blocking Zhor, he’s terrorizing her at her nap time.

In order to show her displeasure about the two intruders in the house, she did it up right by marking her territory on the bed of each triplet. I guess she couldn’t decide who brought the two annoyances into her house so she punished all three coeds; even our innocent son, Sam, who didn’t even bring home an animal.

The calm before the storm. Daisy and Zhor pretending to be innocent.

Sam, my husband, and I suffered collateral damage. But, I’ve got a strategy for protecting the kids’ beds once they and the new pets are gone and we re-open their rooms. I bought cheap, clear shower curtains to cover their beds just in case Daisy Mae should decide to mark her territory again. She’ll get a surprise when her feet get wet.

We’re pretty impressed with the new pet parents tending their critters and cleaning up after them even though at times when both kids were at their summer jobs, whoever was home pitched in with pet sitting and all that came with it. That included washing all that cat-marked bedding. With four kids and a husband who enjoys dirty outside work, we’re used to tons of laundry and our washer and dryer purring like background music all through the day but those smelly sheets and comforters tested the appliances’ endurance. They had to be treated and rewashed about three times each. Wow. Daisy sure knew how to make her point.

I love our picnics together, Miss Sadie.

Summer break is almost over and I’m pretty sure we’ve all fallen for those little big-eyed critters. That means, not only will our comfy nest lose three students to college, but it will also lose two adorable fur babies. We may not miss the cat-fighting, the housebreaking and the chewed up belongings, but we sure will miss those funny sweet faces and watching our young adult kids practice responsible parenting, even if their kids are furry. Looking on the bright side, getting into an improved habit of safely putting away our belongings, we’re on our way to childproofing the house for future grandchildren or for when the kids and critters come home again.

Sadie hiding from Tucker who keeps biting her long ears. Tucker also stole the mates to these shoes.

29 thoughts on “Fluttering In and Out of the Empty Nest: This Time With Grand Pets”