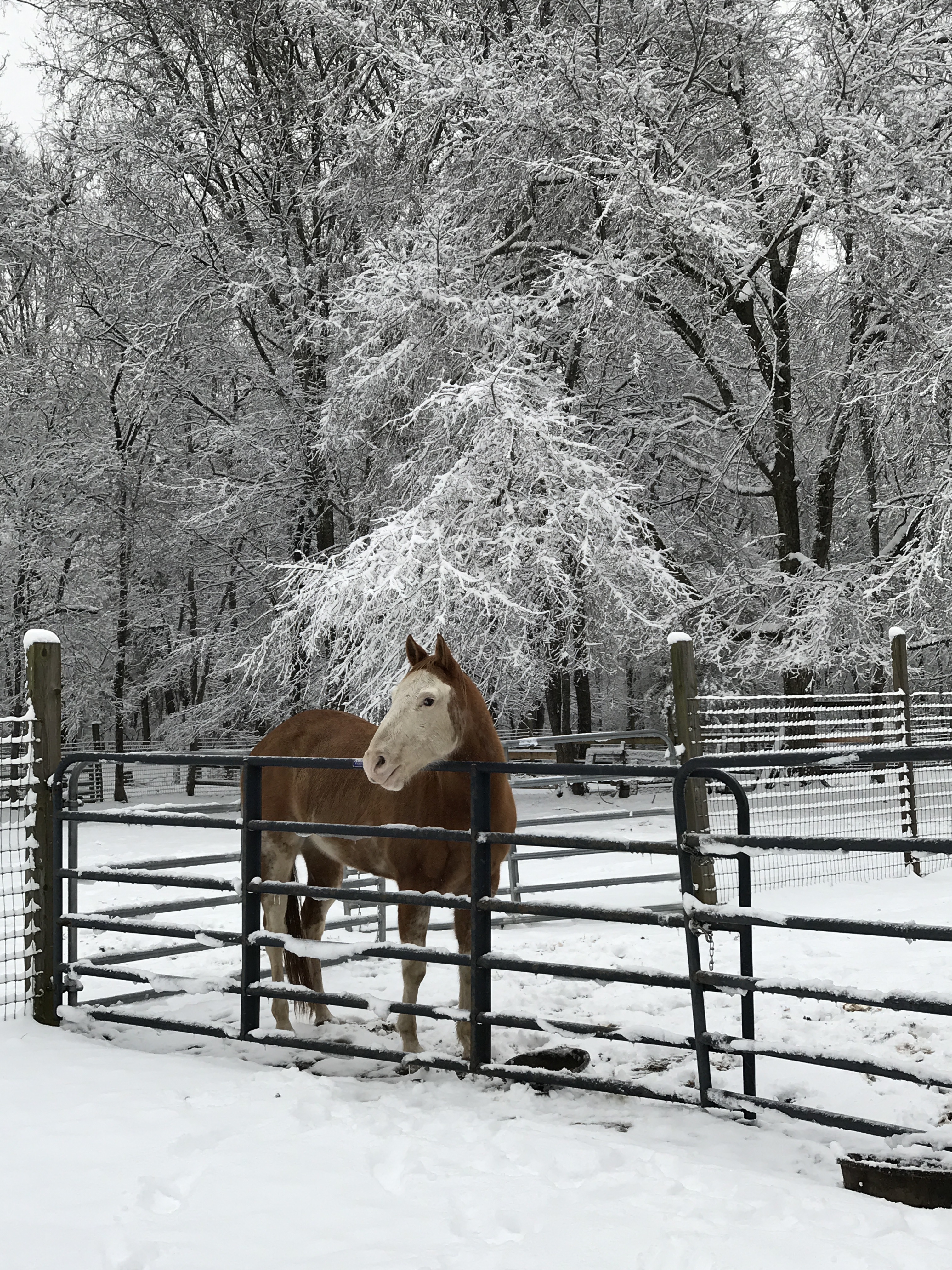 We Got a Real Snow This Time

Back in 2015, I made fun of our piddling little snow storm saying all we needed was a broom to clear a path. Well, two years later, I have to eat my words at least a nibble. We have real, honest to goodness fluffy snow. Not ice and haven’t lost power for a change. Better knock on wood from saying that. This time, I’ll pull out not just the broom but copy a friend’s idea and use the leaf blower. It looks like this snow may stick around for more than twenty-four hours since it’s going down to fifteen degrees tonight. But have no fear. It’s going back up into the sixties for the weekend. And that’s why we love a snow day in the south. We all know it’s best to close everything especially school, and keep drivers off the road. Might as well make snow cream, a snow man, and warm up by the fire with cocoa. And do it all right away since the snow will likely melt away tomorrow.

Here’s the post from 2015. Just for kicks and giggles.

We don’t need a snow blower in Charlotte. We just need a broom and perhaps to puff out our cheeks, pucker our lips and blow. Our snow tends to be light and wispy bordering on wishful thinking most of the time. With our latest forecast

for snow we watched tiny flurries lift our hopes for a moment before dashing them mere moments later, dissolving into a colorful sunset.

Now ice is a different matter. We know how to have an ice storm and are masters of the milk and bread dash in preparation for those famous milk sandwiches. We also clear the shelves of rock salt, batteries, snow shovels, sleds, and shredded cheese. Sorry, I went back to the dairy aisle for that last item.

The city closes for good reason. Roads shouldn’t be used to play bumper cars. Even if people claim they can drive in ice, don’t believe it. Vehicles don’t come equipped with skate blades or skis for tires so there is no way to have traction. I’ve yet to see a car angle the tires in a V and pizza to a stop. That’s ski talk.

In the interest of safety and keeping the streets clear for emergency vehicles, people are encouraged to stay home when ice storms come. People make fun of the south closing down for our tiny amounts of frozen stuff but trust me, we’re better off avoiding the road if possible. Without enough equipment to clear roads, the accident count is ridiculous with folks trying to drive in ice.

Power can be a real bugger in ice storms. As a Tree City, USA, once our ample tree canopy is slathered in ice, the weight of the limbs lying or breaking across the above ground electric lines often causes massive power outages. Our family has an additional issue to deal with when ice storms hit. Our farm, nestled in suburbia, still runs on well water, and that well needs electricity to pump the water up and into the house. That means if our power goes out, we have no water or electricity. It’s like Little House on the Prairie for us. At the threat of an ice storm we all know what to do, “just in case.”

On a night when we’re scheduled to break our record low with single digit cold weather, we put a fresh light bulb in the pump house to keep the “well pump” nice and cozy so it won’t freeze. We’ll also let the faucets inside the house drip and pray the pipes don’t freeze, then burst. Who needs that?

With the latest storm’s end, school had a two-hour delay after two snow days off and that’s just the way it is with snow days in Charlotte. We’re expecting to hit a low of five degrees tonight, which is a huge deal for us. We’re breaking records with our cold weather.

Our winter weather is nothing compared Boston, the Midwest, or even the mountains of North Carolina where our oldest daughter lives and now knows what really cold means. I hear it’s thirty below in Wisconsin and school is in session. We have no reason to complain. We barely make the news unless our peach or strawberry crops are endangered but this is us. Charlotte, NC in the snow that didn’t really happen. We got sleet and ice instead. At least at our house, we were wishing for fatter flakes and snow cream. We were wishing for snowmen and sledding. The latest snowstorm turned into a really cold “cold front.” The kids had two days out of school without a snowman in sight. Hmmm… I hope nobody from Boston reads this.

Disclaimer: the photo is not of this year’s snow. The sun came out and it melted too fast to get a picture.

21 thoughts on “We Got a Real Snow This Time”