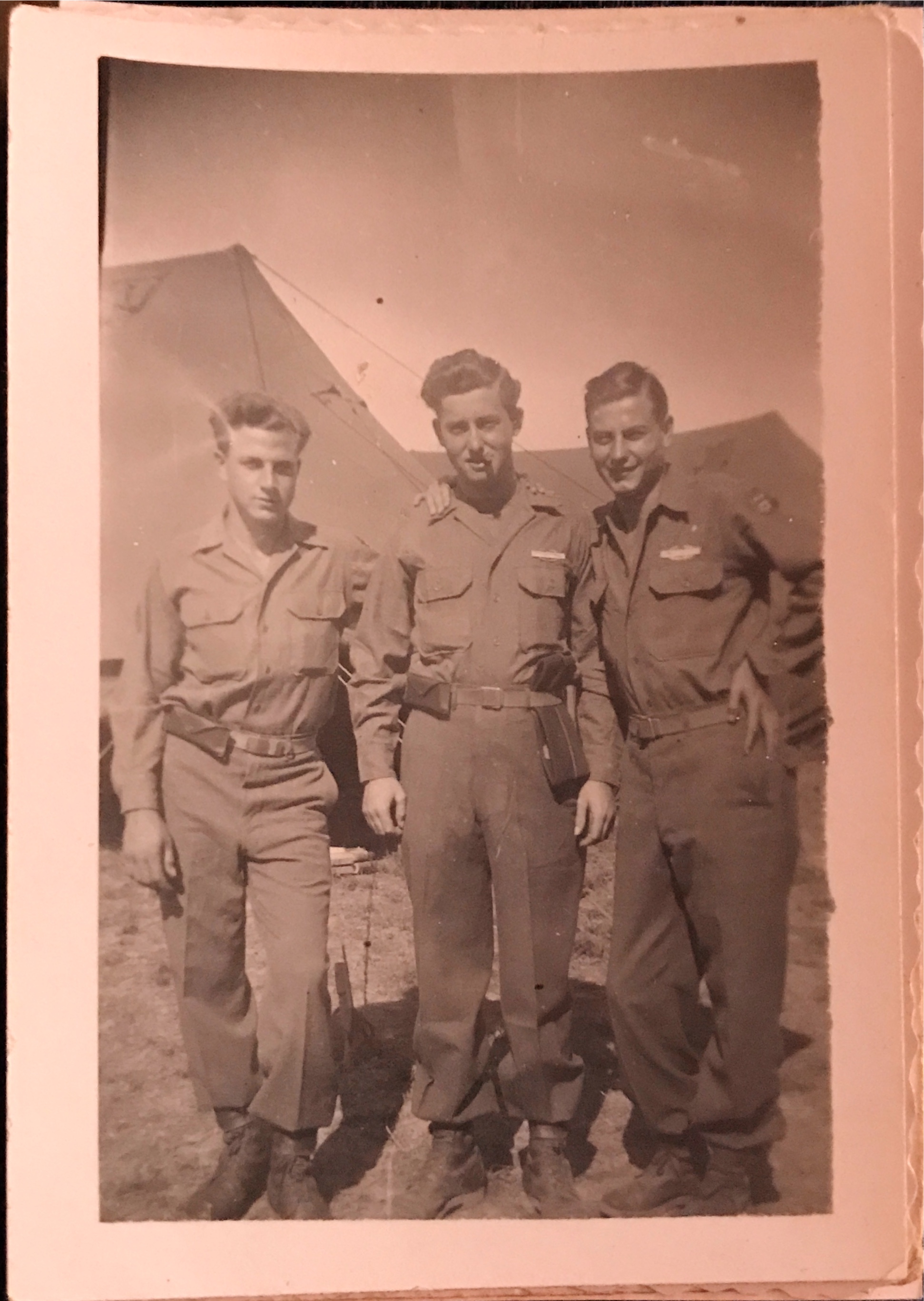 I remember finding the tiny manila envelope, tucked under a blanket in the trunk of your Oldsmobile eighty-eight. When I discovered the black and white military photos inside, I was both shocked and thrilled. Seeing you and your army buddies with a couple of tiny-waisted ladies sporting floral summery dresses, I wondered if one of them was the French girl you befriended that cost you the corporal stripe.

I felt like I’d uncovered a different man, leading a different life. So surreal compared to your life as Mr. B, the ladies’ retail salesman, devoted husband and father. You wore a confident, almost cocky, “I can conquer anything” expression. Youthful and handsome as they come, in one picture you were the centerpiece, standing between bookend pals, one with a hand on your shoulder and the other with an arm wrapped around your back. And that cigar in your mouth. What was that all about?  Were y’all posing for the ladies?

This must have been before. Your hair, long and wavy on top, was not the buzz cut you so despised. You told me that the hardest indignity about the enlistment process was losing your pretty hair. I think you said it took three trips before it was cut as short as the Army required. Since your hair had time to grow, this picture must have been after boot camp. In the states or where? Tents in the background look like those in old war movies. I imagine they smelled musty as a tobacco barn at curing time, and were just as hot at bedtime. Perhaps you were too exhausted to care.

Was this before you fired your sixty-millimeter mortars and wondered how many German men you’d hit? You said men, not soldiers. You shared that thought in a moment when you let your guard down and told me some of your experiences. There were stories you couldn’t tell.

This picture was before the classified incident which soldiers in the 66th Panther Division were forbidden to discuss. The one that must have eaten at you or been smothered, shoved down to depths too deep to revisit.

These smiling young faces didn’t yet know about the classified incident to come. The torpedoed ship that you nearly boarded. Weren’t you one of the last ones to get on the SS Cheshire? So tired from Christmas Eve KP duty in Southampton, England, up since the middle of the night peeling all those potatoes nobody ate, when the call came to load the two ships. It’s no surprise you rested on your pack while waiting on the dock and fell asleep. The miracle is that you woke up in time to load the troopship, the SS Cheshire and not the former passenger liner repurposed as a troopship, the SS Leopoldville on December 24, 1944. Divisions were separated in the hasty boarding to cross the English Channel to the shore of Cherbourg, France, on the way to the Battle of the Bulge.

What must it have felt like, watching the explosion and fire when the two torpedoes from the U-Boat hit the other ship, knowing but not registering the atrocity, while switching to survival mode; you told me your ship zigged and zagged to avoid another torpedo, trying in vain to contact help from nearby ships, communications and decisions hampered by Christmas revelry on the shore. Allied forces celebrating with their own Christmas dinners a mere five miles away failed to mobilize in time to rescue the victims.

You must have mourned in shock. Your fellow soldiers and friends, your innocence, and even the anticipated Christmas turkey dinner more than fourteen hundred men would never smell cooking while thinking of home. A horrifying total of 763 soldiers and 56 crewmen perished either in the blast or in the frigid waters of the Channel a mere five and a half miles from shore. The uneaten Christmas meal is easier to mourn than all those young lives lost, young people hoping to save the world from evil. Is it wrong to wonder what happened to all that food?

When the incident––“The Sinking of the Leopoldville”, as one survivor’s book called it––became declassified in 1996, you and your fellow survivors could finally open up and let the pain pour out. A painful stench of memories and visions trapped within your minds’ wall like a dead rodent, inaccessible yet a constant reminder of the rot that shouldn’t be there?

I saw your smile widen, although I never knew it was incomplete, when your lips were freed from government-imposed bondage, fifty-two years later. Why so long? I’ll never understand. I heard there were threats of losing GI benefits as civilians if anyone spoke of the sinking.

But the truth came out. In 1984, when divers discovered the shipwreck, the story was freed from the bottom of what had remained silent as a secret grave. You survivors finally shared your stories with your families and friends, with each other at that long overdue memorial ceremony at Fort Benning, Georgia. Some wrote books, and some, like you, told your story to historians, wise enough to salvage such events while the survivors could still tell the tales so long silenced.

You told me that because your 66th Infantry Division called the Black Panthers was at half strength, your destination, which was The Battle of the Bulge was diverted. For supper the night of the sinking of the Leopoldville, you survivors dined on English candy instead of turkey and all those peeled potatoes. I don’t allow myself to think of the possibility that none of our family would even exist if you’d gone to the Bulge or boarded the other boat.

You often said, “My little mama was at home praying for me and my brothers, all four of us boys across the ocean fighting that war. She must have had some powerful prayers since we all made it back. I felt those prayers. They kept me going.”

I’ll never know why you stored those photos in your trunk. At the time I thought it was because you did not want Mom to see the women in a few of the pictures. You eventually told me they were just some girls y’all met on leave in Florida, so there was nothing to hide from Mom. I assume it was easier to bury that part of your life by hiding the photos so that conversations about the war would not arise, those conversations that you were forbidden to have.

Your little mama prayed for the boy in the picture––still innocent and handsome. Her baby turned into a man, on loan to her country. A man who would someday hold back stories and hide photos. A man who would bury parts of his life to honor his country and protect his family’s innocence.

24 thoughts on “From Buzz Cuts to Bombs: Innocence Lost and Secrets Kept (A Classified Incident Declassified)”