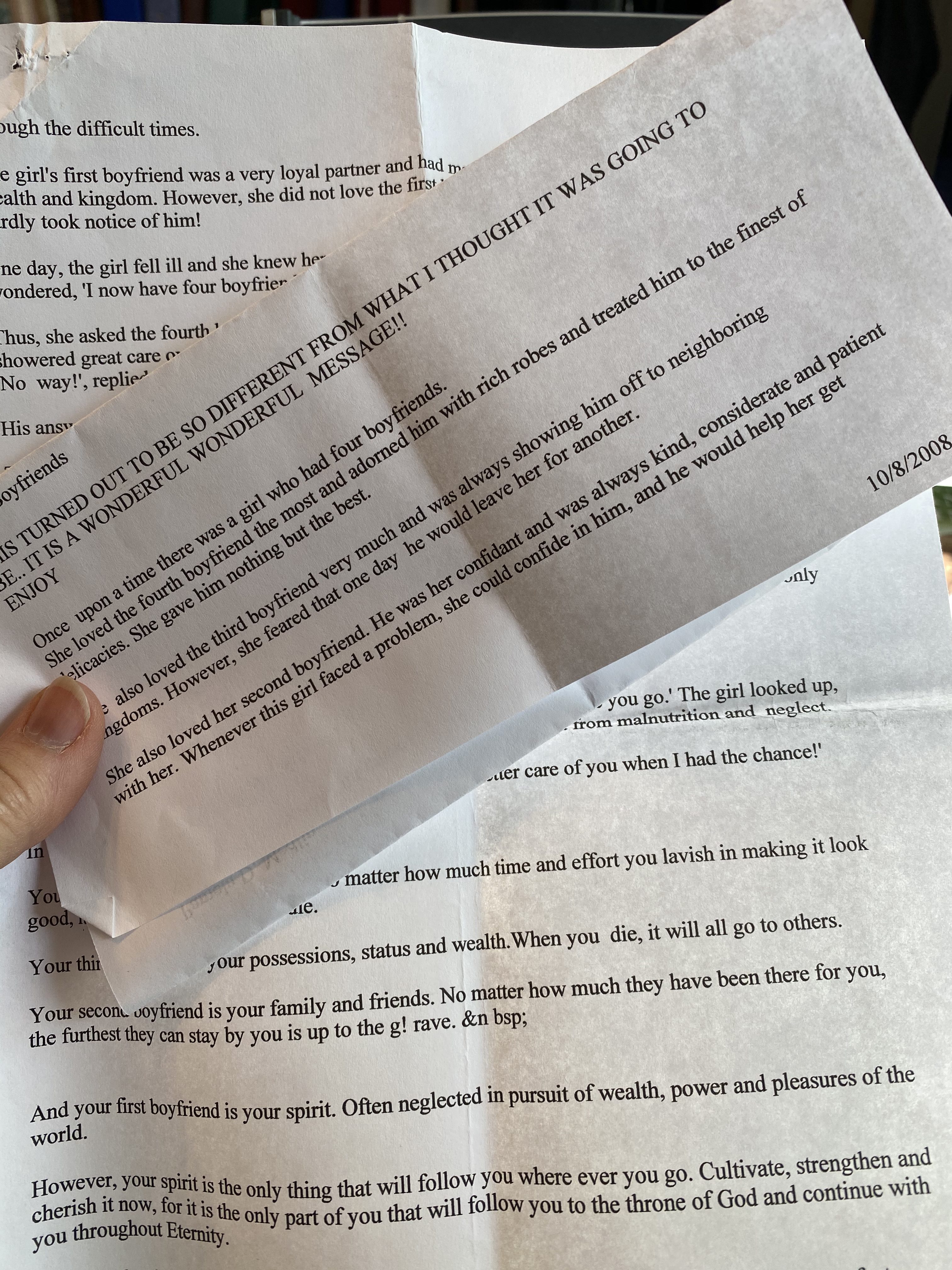 A Message From a Friend From Heaven

I was clearing out bookshelves a couple of days ago, March 26, 2021, when I’m pretty sure my friend poked me from her heavenly home. Purging away, I came upon a book with an e-mail tucked inside from my friend Pam Medlin. Unfortunately, Pam, a non-smoker, died far too soon from lung cancer on March 27, 2017. I was thrilled and surprised to see a little memory of her pop up out of nowhere. What timing! I put the paper on my desk to read the next day, on the fourth anniversary of her moving on to renewed health and happiness once again.

The email was titled, Four Boyfriends, author unknown, and sent to me on October 8, 2008. The ending has a surprise analogy twist. I love analogies. They give you something to think about. And the topic of death read on the anniversary of her death seems like a message from beyond. The condensed gist of the story is this:

The fourth one she adored and treated him to riches and the finest of everything. She doted on him completely.

The third one she loved dearly and showed him off. However, she feared he would someday leave her for another.

The second one was kind and considerate and patient.  She loved him and considered him her confidant and helper through difficult times.

The first one was completely loyal. A partner who made great contributions for her life. Helping her maintain wealth and her kingdom. She paid him very little attention, hardly noticing him.

When she became gravely ill, she asked each boyfriend, “Will you follow me and keep me company?”

The fourth one said, “No way.” And walked off.

The third one said, “No. Life is too good. After you die, I will marry someone else.”

The second one said, “I’m sorry, I can’t help you out this time. I can only accompany you to your grave.”

The first one said, “I’ll go with you. I’ll follow you no matter where you go.” She was grieved that she had hardly noticed this one who was always with her. “I should have taken much better care of you when I had the chance.”

These four boyfriends can represent our lives.

The fourth one is your body. No matter how much time and effort you lavish in making it look good, it will leave you when you die.

The third is your possessions, status, and wealth. When you die, it will all go to others.

The second is your family and friends. No matter how much they have been there for you, the furthest they can stay by you is up to the grave.

The first is your spirit. Often neglected in pursuit of wealth, power, and pleasures of the world, your spirit is the only thing that will go with you when you die. Cultivate, strengthen and cherish it now since it will continue with you throughout Eternity.

Wisdom from an old friend. I hope it touches others as it did me.

9 thoughts on “A Message From a Friend From Heaven”