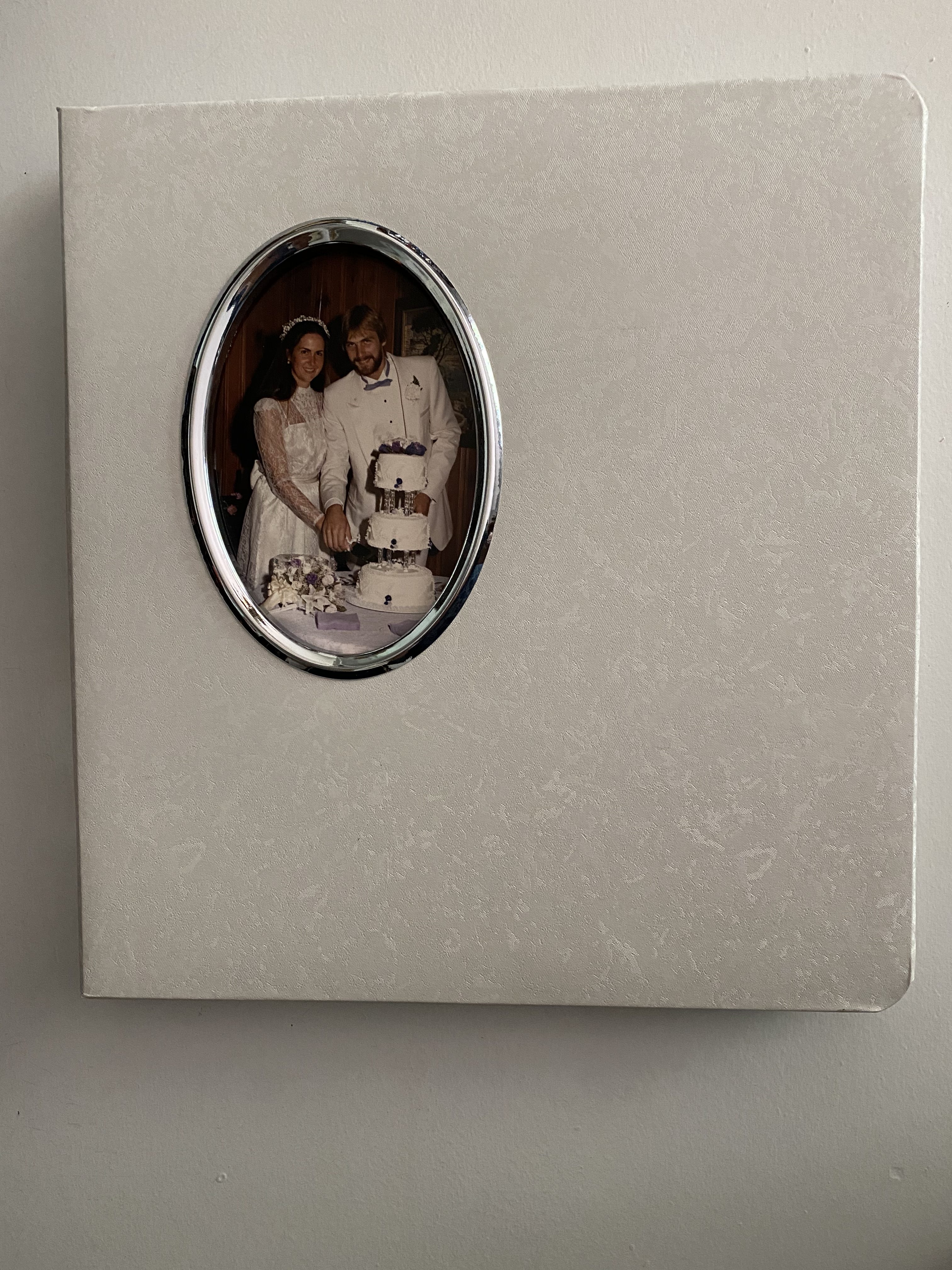 Looking at the yellowed pages of our wedding album, I knew it had to go. The album, not the photos. Trying to slip the eight-by-ten photos from each sleeve didn’t work. In frustration, I tried separating the yellowed and crinkly plastic from the white edging and found that it was a gluey mess. Each picture that I removed was rimmed on one side by white goo.

Oh my gosh. What could I do to get that tacky mess off? Every photo I placed in a pile added more goo to the photo beneath. I discovered this too late. At least half the photos stuck together.

bride and groom pic in old album with yellow sleeve

Bride and bridesmaid in old album in yellow sleeve

What do you do when desperate to find answers? I googled it, of course. “How do you get glue off photos?” Passing up ideas of scraping the glue off with fingernails or razorblades, I came upon a hot idea. All I needed was a hair dryer and some paper towels. A two-ingredient life hack. That’s my kind of trick.

I grabbed my dryer from the linen closet and went to work heating each gooey edge and pulling the sticky white stuff off with a paper towel. It may sound easy but it took forever. Before starting the ungluing process, I went online and ordered a new wedding album to slip the cleaned-up photos into. The old book was trash. Would you believe Amazon got the book to me before I was finished unsticking the pictures?  They sure did.

While the photos were out, I labeled the backs with our names and the date and even the location of the wedding. Just in case people a hundred years from now should find the album, or the pictures, lying around willy-nilly in some box in an attic, might want to know the details.

I’ve wasted far too many hours of my life trying to identify people in photos left to us by our families. We even took our kids on a meet the relatives tour of the Midwest back in 2010. We travelled from town to town, hauling a suitcase filled with decorative, cardboard-framed sepia photos that we found in Dan’s parents’ house after they died. It seemed to me that such fabulous old pictures from the early to mid 1900’s deserved some recognition.

What a treat it was to show the photos to a house full of relatives who gathered in Ohio or Indiana to meet us and have an octogenarian uncle say, “That handsome young man with a head full of hair is me.” Oh my goodness, that was so special. We had so many questions answered and stories shared on that trip. My grandmother might say, “I wouldn’t trade that for a pretty thing.” Some things are indeed priceless.

Our wedding pictures fall into the priceless category. We possess the originals and there were not many copies. I vowed to learn a thing or two about protecting old photos after this old album experience. First of all, I advise you to join me in removing photos from those old albums before the acid eats the pictures. And label the backs. Maybe some grandchild not even born yet will actually care about ancestry. Don’t shake your head. You never know.

I am sure there are crunchy old envelopes filled with negatives of our old family photos tucked away somewhere but who has time to go through those, holding each one up to the light to see what’s what? I decided to scan the wedding pictures in to my computer before labeling and placing them in the new album. I’ll share the scanned photos with my children, maybe even in a Shutterfly book, so they won’t have to fight over the gorgeous refurbished album. Ha. I wish they would fight over all the historic items I’ve saved. It’s more likely they’ll draw straws to see who gets to dispose of it all. The work of all my years as the family historian may end up in shredded piles of compost or sold at a flea market for photo craft projects. Oh, my heart.

I remember a time when I made two, three, four, or more copies of photos when our kids were little. The kids will never have to go through and divide them, I thought. They can each have their own sets of photos of their lives. Wasn’t I clever?

No. It just means I have multiples of everything organized and lovingly labeled in photo boxes and bins taking up my storage space until they come to their senses and want to house their own copies. All those ballgames, dance recitals, choral concerts, Halloweens, birthdays, Christmases. Mission trips to sad, rough, and foreign places. Vacations to the mountains and the beach. Oh, and even those dark dreary shots from Chuckie Cheese’s and skating rink parties. And the pets. So many pet photos. And now GRANDCHILDREN. I can’t bear the thought of not having baby books and boxes of mementos of those sweet babes so I’ll make books, print photos to label, and clear a corner somewhere to house those treasures as well.

So much good stuff to go through. Memories to enjoy and chat about. That’s going to happen when I’m in my nineties. That’s how I want to spend my twilight years, when I enjoy sitting more than going. Reminiscing, reading old journals as if they are novels, laughing, and swapping stories.

Don’t tell me that won’t happen. That’s my dying wish. Well, my closer-to-death-than-I-am-now wish. I’m currently going through such treasures with my mom who is nearly ninety-three. We laugh and sigh and expand on the stories behind photos. I’ve learned so much from this precious time I’m spending with her and wish I’d done so with others who have as mom says, “Gone on to glory”.

For now, I’ll relish the fact that I saved this wedding album. Our pictures are no longer stuck like goo. It looks like our marriage is sticking pretty darn well. After all that was the original goal behind that wedding. Before I move on to tackle scanning in all the other old photos, maybe I’ll take a break and spend some time outside my office and the history collection. I’ll hang out with the people for whom I’m preserving all these tangible memories and do some living worth recording for history.