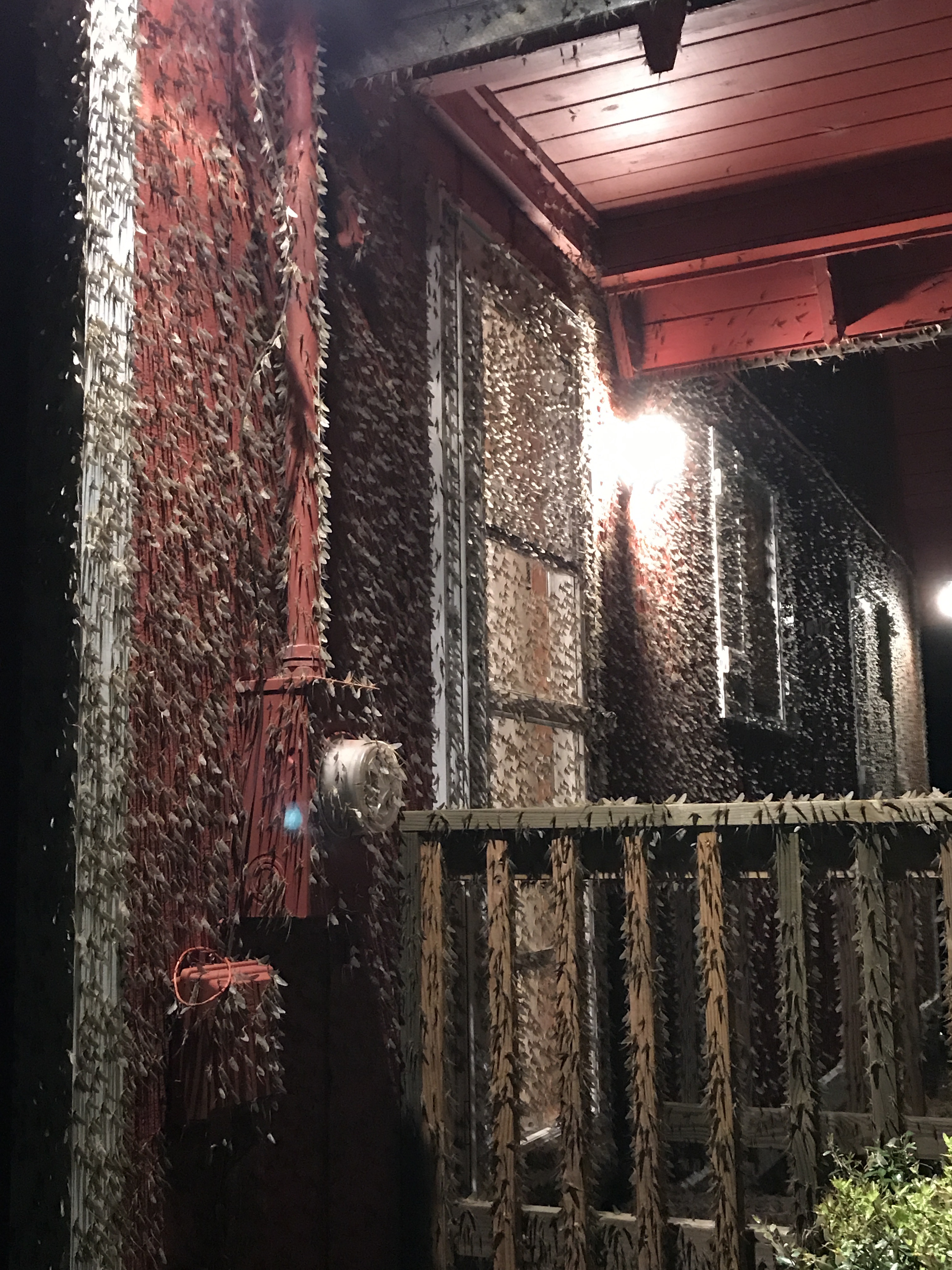 What do you call millions of mayflies swooping in and covering your house, boat, cars and ground? Annoying? Ridiculous? I call it a plague. When these two-inch long cousins of the dragonfly swarm in, there’s nothing to do but watch in amazement.

They covered our family lake retreat in eastern North Carolina with the speed of a Boston blizzard. Only it’s a blizzard of bugs. Within an hour, not just the siding of our red barn shaped house was encased with the critters but also the porch floor and rails, and the bushes nearby. Within minutes, our red house turned tan and the porch railing was almost pretty, adorned with living ruffles. They reminded me of synchronized swimmers in the way they lined up with their wings all facing the same direction.

Strange as it may sound to entomophobics, folks with a fear of insects, we didn’t run back inside. How could we? There was no way to get in through the front door, fully engulfed by now. We had a rough enough time sneaking out through the back screen porch to see what was happening. Moments before, we were merely trying to walk the dog when, lo and behold, we saw dozens of the alien-looking creatures with long antennae-looking tails dotting the front storm door.

By the time my niece, brother, and I closed our jaws to keep from munching a passing mayfly, the lawn and gravel drive were carpeted in a writhing and wiggling love fest in order to propagate their species. Others dangled on shrubbery like earrings. A photographer’s dream, each sight compelled us to take picture after picture.

My niece, already taking photos that could rival those in National Geographic, kept calling us over to look at one fascinating spectacle after another. We especially got a kick out of the little fellows riding around on our feet. I left the photography to her while I googled the life cycle of mayflies. Don’t judge me. Yes, I stood there with bugs on my feet while I researched said bugs. I learned that mayflies rise from the lake bottom to the surface and then into the air to mate, drop eggs back to the lake bottom, and fall breathless onto the water. There, they become a feast for the fish relishing mayfly season. That’s what’s supposed to happen but a strong wind that day must have blown them inland and they were confused. That’s just my theory. Plus, we had lights on.

I also learned that mayflies are drawn to light, which explains why they blessed us with their arrival. Houses all around us were dark, uninhabited at the time, so we won the insect jackpot. In Pennsylvania, mayflies swarm to the lighted bridges, totally covering rails and the road. The bugs have been known to pile up to six inches deep on bridges, causing numerous car and motorcycle accidents. One source claims that driving on the bugs en masse is like driving on ice requiring the slippery critters to be removed with snowplows.

I suppose our measly home invasion was not so bad after all. I should feel sorry for the mayflies as they never eat a bite of food and only live a day or two. What a stinky life. Speaking of stinky, as we squished through the carpet of bugs wearing mayfly ornaments on our ankles and shoes, we smelled a definite fishy odor. It makes sense that they smelled like seafood since they came from the bottom of a lake.

Squealing like little girls, we brushed the bugs from our hair. After taking another picture of them decorating our shoes, we stomped to get them off our ankles and feet, and made a run for the screen porch. We took off our shoes to find the bottoms covered in what looked like nutty brownie mix. So much for my new fancy flip-flops. An unfortunate casualty of the mayfly plague, they still reek of fish so I’ll only get to wear them at the beach. That is, as long as there are no hungry seagulls nearby. I’ve had enough winged creatures landing on my feet.

The morning after shone new light on the final stage of the mayflies’ life cycle. The decorated house would soon be swept and washed clean of the remains and life would be normal again. I felt a little melancholy as I backed my van out of the bug covered gravel driveway. A few dozen insects remained on my windshield. I took close-up pictures of these last survivors and drove away, only to see them blow off a few at a time. Next spring, we’re shutting off the porch lights.