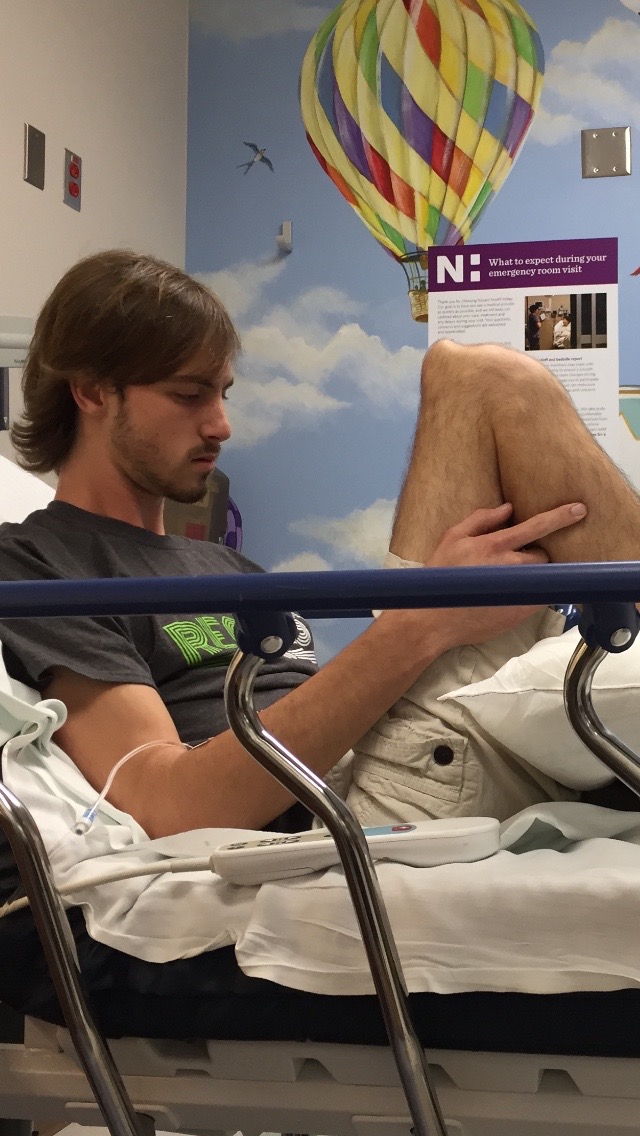 Mom, Where Should The Ambulance Take Me?

I answered my cell and heard, “Mom, I kinda dislocated my knee. Which hospital should the ambulance take me to?”

If only our son Sam’s kneecap were simply dislocated and not shattered into six pieces when he fell while doing pull-ups, that would have been almost delightful. This event was the latest straw added to our camel named Life.

We all experience times when overlapping stressful events threaten to send us over the edge of patience and composure. I try to silence the voice inside that’s saying, “Give up, curl up, and have a good cry since there’s little you can do anyway.”

I say, “Phooey” to that kind of thinking. In fact, I often feel energized as if from above when calamity strikes or attention is needed. Like endorphins kick into overdrive. “Let’s do this,” says the other voice in my head.

The past month falls into an overload category, with a touch of calamity mixed in. Here are a few of our endorphin-raising events:

#1 Hurricane Matthew flooded the eastern part of our state, which included my hometown, stranding my home-loving mom with us, one hundred and sixty miles inland. She came with lots of my begging just for the weekend to ride out the hurricane. Instead, she was stuck at our busy house for two weeks when the main road and many alternate roads back to her peaceful home were still in flood stage or washed away. Two weeks is a long visit for a woman who believes that after three days both fish and company smell. She headed home as soon as possible to survey her property damage.

#2 Following a long year of dreadful feline cancer we had to put our sixteen-year-old cat to sleep. Her cancer may have won but she sure hung in there as our lap cat eating like a horse until the end.

#3 I had a sensitive temporary crown checked out and dang if it didn’t require a root canal. The endodontist (that’s a dental surgeon) sang along to seventies rock the whole time, warning me, “My singing will be the most painful part of the procedure.” Maybe, but his bill was plenty painful.
A few days later, I relaxed into my regular dentist’s chair as he installed a new crown on the tooth that had the root canal. Finally, my sensitive mouth could be pain free.

#4 Our hound dog, Sadie, who had been having huge lake-like accidents in the dining room, got an ultrasound of her bladder. Sure enough, she had bladder stones. The plan was to flush them out or remove them surgically while also removing three skin cancers. In her sedated state, the cancers were removed and the vet stood her up on hind legs and squeezed her bladder. Five bladder stones washed out. As a bonus, she got her nails done while sleeping. If only they had cleaned her teeth and given her a bath.

#5 One daughter, Sarah, who is one of our triplets, dislocated her shoulder while driving her car. Now she receives physical therapy twice a week.

#6 Another of the triplets, our son Joe, at college across the state, also has a shoulder that pops out and needs surgery over the Christmas holidays. The last time it popped out, he was doing pull-ups. That’s crazy. Both our sons do risky sports. They do flips, climb rocks and trees five stories up, and both of them ended up hurting themselves doing pull-ups. What a wild coincidence.

#7 Now back to the ambulance call. Our son Sam crashed down onto his knees when his pull-up bar came off the dorm doorframe. He crushed his kneecap on the concrete floor then took a ride in an ambulance to an Emergency Room near our house. I tried to meet him there and was told repeatedly at the front desk, “He’s not in the computer so he hasn’t arrived yet. Maybe he’s at a different hospital.”

Fortunately, a woman from the back hall came out and heard my dilemma. She said, ”We have a young man back there with a knee injury. I can take you to him.”

Sam’s knee looked like a pointy bird beak, folded up to his chest. Tears filled my eyes after I saw the glisten in his. Sam, our child with the extra high pain tolerance, was suffering indescribable pain.

Fast forward to late afternoon with all of our family, his nurse, and the ER doc in disbelief that Sam would go home and surgery would be postponed for ten days so swelling and inflammation could go down.

The first hurdle to jump toward home was to straighten the rigid knee that caused horrible pain with the slightest move, let alone stretching it out.

With Sam on all the IV narcotics and nausea drugs legally permissible without it being euthanasia, the orthopedic doctor, blond, and looking about eighteen, worked with Sam’s male nurse to gently pull the leg out straight. Unbelievable. Our disbelief and frustration turned to relief as Sam said his pain level was about a six instead of a nine. He was saving level ten for after the surgery.

Nursing our son through the excruciating pain from surgery, which was more like a level fifteen than a ten when the nerve blocks wore off, we’re counting our blessings. Sam’s pain will pass and he will eventually walk on his own again.

We’re no longer tending our very sick cat and our Sadie dog had good biopsy reports and stopped having accidents in the house. My mouth has no sensitivity now. Our daughter’s shoulder is improving and we know more about dealing with surgery and pain management. Hopefully we will be better prepared for our son Joe’s shoulder surgery and recovery. We should be experts by then.

Oh, did I mention we are in the middle of remodeling our kitchen right here at the holidays?

27 thoughts on “Mom, Where Should The Ambulance Take Me?”