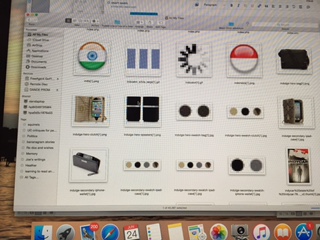 My computer keeps passing out from sheer OBD. Overloaded brain disorder. I have that too. Media files are likely at the root of the problem, since I take way too many photos and videos. I set out to move the dozens of band, chorus, track, dance, and church youth group videos onto an external hard drive. It sounds like I know what I’m doing and once in a while I actually do.

Going into my MAC’s “All My Files”, I am flabbergasted. No wonder my computer has no room. I have 25,000 pictures in this thing! I know I take lots of pictures, but glancing through, I know I didn’t take all these. Duplicate pictures are no surprise but what has me stumped is all the additional pictures and colorful icons I’ve never seen.

My computer is overflowing with political people that I neither like nor want invading my home. I’d never invite Sarah Palin into my house as I think shooting moose from a helicopter is pretty unfair hunting even if she can see Russia from her yard. There’s Rush Limbaugh and John Weiner. Neither one is welcome here. Eww gross. There are pictures of a shirtless Putin on a horse.

There are several folks pictured here that I’d like to meet: Aretha, the Pointer Sisters, and Elvis. But I don’t want them taking up valuable computer space. There are lots of news pictures from Afghanistan, England, and a blast from the past, Cash for Clunkers donations. There are animal stories that would make me cry so I know I never looked any of those up. There’s a Pena Dog Park. What’s a Pena dog?

The NC Lottery and every game logo imaginable are here, plus a man in a shower cap holding a walkie-talkie. Who the heck is he? Here’s someone caught on a ski lift just hanging out. There are pictures of oiled up birds and ducks that were caught in an oil slick.

I see that the North Pole melts while Boston has blizzards. There’s a Starbucks cup and a manatee. While swimming in the Gulf of Mexico years ago, a manatee snuck up and surprised my daughter and me, but the manatee on my desktop is not the same one we encountered. There’s a close-up of the queen. I’ve never met the queen. How could I have taken that close-up?

More pictures include Obama, guns, and gun control labels, Texas and West Virginia flooding, a snake in the water. Wild fires, tornadoes, and heat waves reeking havoc. The last living Von Trapp family member, and Hugh Hefner with his very young blonde bride. A picture of Paris Hilton’s dress. Who cares? Athletes galore, Pakistani violence, terror attacks, and flags of every country. All tucked away in my MAC.

Here are more recent additions: England wants to be alone. Sharks attack, King James skips the Olympics, and mosquitoes spread Zeka virus. Bad guy Chad from the Bachelorette grins like he has an evil plan. He’s right there beside Trump, Hillary, Bernie, and the Democratic sit-in.

I understand that sites leave cookies and pictures from all we do. Dang cookies! My poor computer needs fewer cookies. Those demons clog its little memory arteries as sure as real cookies clog mine.

Doing everything the hard way as usual, I ended up spending an entire day removing the darn crumbs the cookies left behind. Tossing them in the trash and getting immediate gratification hearing the crackle as it empties is fun except when paranoia speaks up saying, “You might regret deleting this. It’s vital to the computer’s functioning.”

After my day of deleting pictures and icons, my son nonchalantly says he can fix a setting to avoid all this hassle. Now he tells me.

(Disclaimer: if those things aren’t cookies and are called something else, I apologize to the cookies for slander.)

4 thoughts on “Computer Passes out Eating Too Many Cookies”